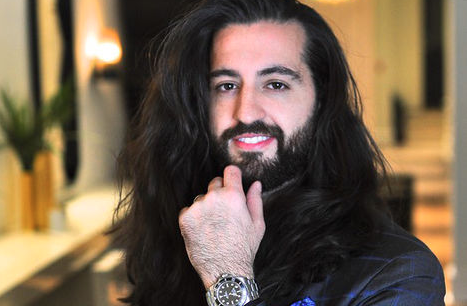 In the matter of four short years in the heart of downtown Red Bank, Yanni Erbeli Salon has become one of the go-to hair salons for quality hair services, but why?

Born and raised in New York of Albanian decent, Yanni Erbeli began his journey to become one of the most sought out stylists in the nation. He began working as an apprentice at the Oscar Blandi Salon, at the time one of the top hair salons in the world. Yanni first experienced the magic of the salon at the age of sixteen when his friend who worked there asked him if he would like a haircut there. After that experience, Yanni knew he was destined to create the same magic for clients of his own one day.

At the age of seventeen he began cosmetology school, and later that year he began working at Oscar Blandi Salon. Yanni quickly found himself styling the tresses of celebrity and socialites. He was fortunate enough to have his name on the credits of an editorial for Tatum O’neal, whom personally requested Yanni herself. Quickly he created a name for himself and at the age of twenty one, Yanni became a stylist at the Warren Tricomi Salon. His dream of becoming a prominent hair stylist was fulfilled, or so he thought.

Yanni discovered that dropping everything to hop on a flight to an exotic island for exclusive clients was not what life was about… He realized the secret to the quality of life was his family. So a few years later, Yanni took a position cutting and styling hair in a salon in central New Jersey where he realized there was a need for his expertise. After building an extensive clientele in one short year, it became his mission to open his own place of business. He wanted to create a salon that had the same level of quality he knew of. His idea was to create a team of stylists and colorists who each specialized in their craft- he didn’t believe in a hair stylist doing every service under the sun.

Specializing is one of the Keys Yanni believes works to cut (no pun intended) down the amount of unsatisfied clients that are roaming around the streets of cities and metropolitan areas. The second Key is to listen closely to what the client has to say. “We as stylists are here to help you but we are not here to decide what look we think is best suitable for you. We will help guide you there by ways of deduction, but ultimately it should be the best version of what you are looking for on yourself.” The third and last Key is the experience of having someone actually care for you, in a state of vulnerability when you are not happy with your hair in its current shape and or color.

But no need to dwell on the past – lets fast forward to the magical experience that awaits you.

Please arrive 10 minutes prior to your appointment to ensure you receive your full service. We recommend that you book your next appointment prior to leaving the salon so that we can be sure to accommodate your schedule.

In consideration of our other clients and our technicians, please give a 24-hour notice of any cancellation. A credit card is required to secure all appointments. No-shows will be charged the full service price.

Except for replacing damaged products, we do not offer refunds, exchanges or credits on salon services, gift certificates, package series or retail products. All sales are final. Prices may vary by technician. Please inquire about pricing.

For color and chemical services all complaints must be reported within two weeks of the original service date, after two weeks we cannot refund any services or redo services.